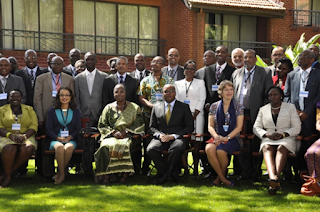 Nairobi, 25 February 2015 -- The WHO meeting to commemorate the implementation of the Framework Convention on Tobacco Control (FCTC) started in Nairobi today with members and participants commending great milestones but cautioning that a lot is still needing to be done to save lives from the tobacco epidemic.
The meeting attended by Member States outlines the implementation status for each state and what still remains to be done to protect African citizens from tobacco use and tobacco-related deaths.
Forty-three of the 47 member states have ratified the convention, with Eritrea, South Sudan and Malawi yet to ratify. Mozambique is a signatory. The meeting which was addressed by various speakers also commended and welcomed new members, Ethiopia and Zimbabwe.
WHO Regional Director Dr Matshidiso Moeti, in her speech read on behalf by Kenya’s Country Representative, Dr Custodia Mandlhate, said that tobacco, a leading cause of death, illness and impoverishment, was one of the biggest public health threats the world has ever faced and kills nearly six million people every year.
She highlighted that “more than five million of the referred deaths were the result of direct tobacco use while more than 600 000 are the result of non-smokers being exposed to second-hand smoke”.
Read the full press release here