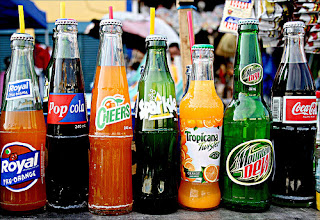 Sugary drinks such as soda have become a well-known cause of weight gain and obesity.  New research published in the American Heart Association’s journal Circulation investigated the link of these beverages and the development of premature heart attacks and death.


The study followed 42,833 men’s diet, weight, smoking and exercise patterns for an average of 22 years.  The primary finding of the study was men who drank one sugar-sweetened beverage per day had a 20 percent higher risk of suffering a heart attack.

Large fluctuations in one’s insulin levels can occur when you continually consume high amounts of processed sugar.  Erratic fluctuation in insulin has been linked to the increased risk of heart disease, diabetes and weight loss resistance.
Sugary-beverage consumption "appears to be an independent risk factor for heart disease," says lead author Frank Hu, M.D., a professor of nutrition and epidemiology at the Harvard School of Public Health.
The consumption of sugary beverages has now been linked to several other risk factors that will contribute to heart disease as well.  High triglyceride levels and low “good” HDL cholesterol is now a known outcome of soda consumption.  Both of these increase the risk of suffering a heart attack.

Obesity and genetics was once classified as the primary cause of heart disease but the findings of the study suggest that it’s more related to the consumption of sugar and other dietary habits.
Sugary beverages have also been found to produce inflammation – a major cause of chronic health conditions.  It produces internal visceral fat storage that will put additional stress on blood circulation and overall organ function.
Additional lab tests in the study confirmed elevated levels of C-reactive protein (CRP) and leptin.  C-reactive protein is the most accurate lab test that measures inflammation levels throughout the body.  Leptin is a hormone that helps regulate your metabolism.

Leptin is less heard about but a very important lab test.  This hormone tells your brain to burn fat.  When you drink sugary beverages the leptin receptors become less active.  This decreased activity level will inhibit the body’s ability to burn fat.  Weight gain, diabetes and heart disease can result.


Consuming soda has also been linked to the following:

Your body weight is approximately 60 percent water. Water is used in all of the cells, organs and tissues in the body. Hydration is one of the best ways to remove toxins and harmful substances such as sugary beverages. It has been found that one must drink up to thirty-two glasses of water to counteract the effects of one soda.

To determine if you are dehydrated, look at your urine. If it's clear, you're in good shape. If it's dark, you're probably dehydrated. Eating a diet high in fruits and vegetables is another way of re-hydrating yourself. Limit caffeine as it is a known diuretic that can cause dehydration.

Dr. Cory Couillard is an international healthcare speaker and columnist for numerous newspapers, magazines, websites and publications throughout the world. He works in collaboration with the World Health Organization's goals of disease prevention and global healthcare education. Views do not necessarily reflect endorsement.